DRESDEN, June 9, 2022 —— JOYNEXT will be the new sponsor of the Dresden Eislöwen from the coming season. The international automotive supplier is thus expanding its social commitment in Dresden. Already at the beginning of the year, the technology company acquired the naming rights for the ice sports and ball sports center in the Sportpark Ostra. This sponsorship marked the beginning of a partnership with the Saxon state capital, which owns the new "JOYNEXT Arena". 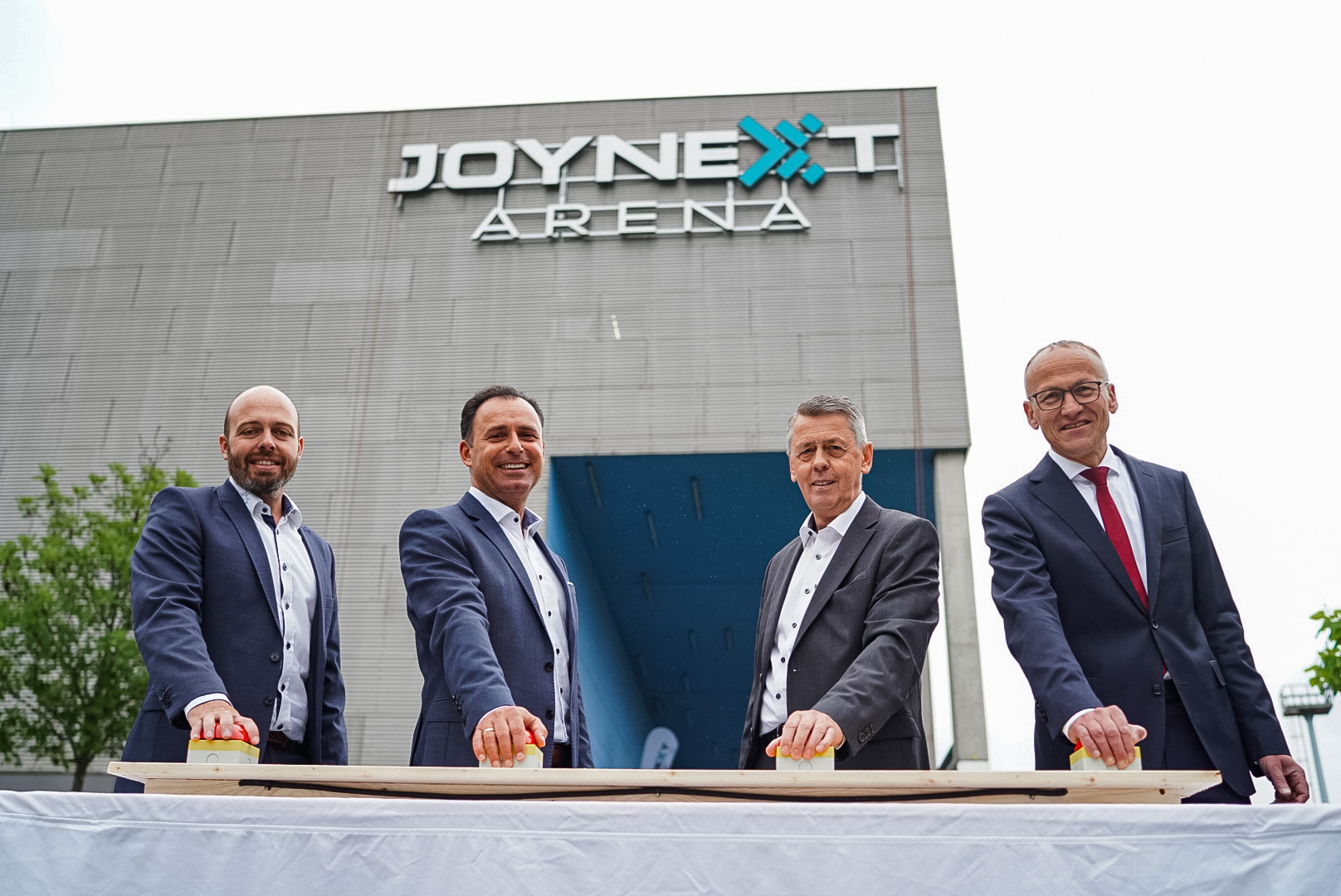 The partnership between JOYNEXT and the city of Dresden was officially launched in January 2022 with the signing of the contract and will initially run for three years. In addition to the right to name the arena, the cooperation includes three ice rinks and a nine-field ballpark. A visible expression of the cooperation is the installation of the JOYNEXT lettering on the ice rink. The installation of the logo took place on May 7 and 8, 2022, and the illuminated JOYNEXT logo is now clearly visible from afar, both from Pieschener Allee and from the Ostragehege.

JOYNEXT is also expanding its social commitment in Dresden. From the coming season, the company will become a sponsor of the tradition-rich ice hockey team Dresdner Eislöwen. With its sponsorship, JOYNEXT supports the operation of the ice stadium and will also make a significant contribution to the promotion of professional sports in Dresden in the future. The sponsorship will initially run for two years.

"When we acquired the naming rights for the ice rink, we realized that the Eislöwen, as the main user, would benefit indirectly but not directly from our involvement. So, we decided without further ado to become a premium partner of the Dresden Eislöwen," says Stavros Mitrakis, CEO of JOYNEXT. "The Eislöwen inspire friends of professional ice hockey with their highly attractive top-class sport. In the future, we will help to ensure that the club can continue to develop well in sporting terms. However, families with their children also benefit from our overall commitment in the Ostragehege in their leisure time. We are proud to be able to support this wide range of activities with our commitment and look forward to working together," adds Mitrakis.

Sports Mayor Dr. Peter Lames: "I would like to thank JOYNEXT for its clear commitment to Dresden as a business location, which is clearly expressed not least by the acquisition of the naming rights. The state capital of Dresden invests a great deal in ice sports and will continue to do so in order to offer the people of Dresden a wide range of ice sports in clubs and public ice skating facilities. For JOYNEXT GmbH, the partnership again offers a good opportunity to present its brand in one of the largest ice and ball sports centers in the country on a local, national and international level. In this context, I would also like to thank our local clubs, who have contributed greatly to the establishment of the JOYNEXT Arena through their communication over the past six months. I am even more pleased that the Dresdner Eislöwen can now additionally benefit from the partnership of the state capital Dresden with JOYNEXT."

Maik Walsdorf, Managing Director of the Dresdner Eislöwen: "We are extremely pleased to be able to gain another partner from the region for the Dresdner Eislöwen with JOYNEXT GmbH. Since January, the JOYNEXT Arena has already borne its new name - for us as anchor tenant, this closes the circle. After very good discussions with Mr. Mitrakis, we are looking forward to the cooperation with JOYNEXT."